Hailing from humble origins, Natasha Watts has been on a whirlwind journey – enabling her to become immersed and discover the magic of performing. Natasha quickly became a familiar face in the music industry and has blossomed as an artist, songwriter, and performer. 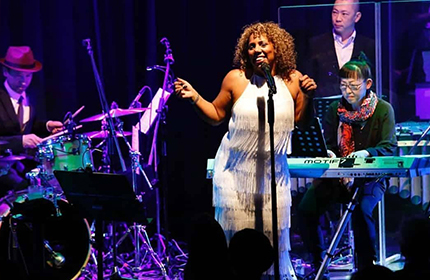 Growing up, Natasha was exposed to a diverse span of genres – her father being a DJ and her sister being an avid soul fan meant that she encountered the world of Reggae, Jazz, Blues and Funk at a young age. Her musical taste adapted and soon she became familiar with every rare groove and soul track well before her years.

At the age of sixteen, Natasha travelled across the Atlantic with Roame Lowrey (Maze and Frankie Beverley’s percussionist). Little did she know that she would be embarking on the trip that would kick-start her musical journey. With help from Lowrey, she was able to realise her potential and develop her talent and skills as a young artist. She experienced the life of a recording artist and the process required to produce her own music.

During her stay in the States, Natasha performed with Kirk Franklyn and the Family – she also performed in a stage musical.

Although still in the early stages of her career – it proved to be a fruitful period for both her talent and development. Her musical peers sparked inspiration and allowed her to explore different musical avenues.  Through this, she was able to discover a newfound love for Gospel and Organic R&B.

Natasha left the States in 1996 and had her son, Taylor, and subsequently, music took a back seat. However, this was far from the end of her musical expedition.

In 2008 Natasha’s mother, Sandra, passed away. She was Natasha’s muse, inspiration and she helped mould Natasha’s soul and direction. Although this period was a heart-breaking and emotional period, it was the birth of life-affirming ‘Time to Shine’. To this day it is still Natasha’s favourite number, due to the deeply personal resonance and relation to her mother.

Natasha exploded on to the UK soul scene with ‘Show Me’ after her first collaboration with Cool Million. ‘Show Me’ was featured on the ‘Cool Million III’ album. This was followed up by the summer smash of 2012: ‘Back 2 U’ with producer Ric Atari. Which was available on the ‘Soul Seed Vol 1’ album – supported with a sleek promo to match the silky tones of the track.

The last few years have seen Natasha in demand more than ever for her vocal flair and vivacious on-stage presence. Many well-respected producers, contemporary songwriters and bands have sought out her formidable talents. She was requested to perform as the main vocalist on a forthcoming Yam Who? EP, ‘Downtown Diva’ on the cutting edge record label ISM Records. Other credits include Reel People, Speedometer on Freestyle Records, various tracks on Purple Music Nervous Records, Vaga Records, Tribe Music, Duff Note, Groove Odessy and Barcoda. In September 2013 Natasha was nominated for ‘The Best New Soul Act’ by Soul Survivors magazine. Natasha won by a landslide and was a clearly loved fan favourite. This was the moment Natasha realised her dreams we coming true.

Further to this success; Natasha played two sell-out shows at the Jazz Cafe in London, performed at The Montreux Jazz Festival in Switzerland. One of Natasha’s proudest moments is supporting the Empress of Soul – Ms Glady’s Knight. They completed seven shows to over 30,000 fans at The Royal Albert Hall in London, Glasgow Symphony, and Birmingham Symphony. This allowed her network further and boost the relationship she has with other artists in the Soul and R&B scene.

Natasha felt compelled to keep creating music after the past few years of musical feats. She knew that she would have to push herself further in order to deliver more critically acclaimed content.

Natasha then took to asking her fans about what they wanted to hear, as she had huge ideas for her next album and wanted supporter input. A number suggested duets. Coincidentally Natasha was already in the process of working with UK star Don E on his ‘Future Rare Grooves’ album. They collaborated on a popular hit track called ‘Big People Tings’ which is now played all over the country in the underground Rare Groove clubs and Reggae venues.

Natasha then reached out to one of her idols, Omar, asking whether he would like to write a song together. Within a day he had agreed and they set about creating magic that is ‘Insatiable’. Omar enjoyed being a part of this collaboration so much that he decided to put the track on his next album ‘Love and Beats’.

The appropriately named second album, ’2nd Time Around’ proved to be a huge success and Natasha has stated she is hugely proud of the work that has gone into this album. Subsequently, her performance groove didn’t slow down here – she then went on to tour with Shalamar, The Fatback Band, supported Candi Staton, Lisa Stansfield, Incognito as well as Omar himself.

Natasha is now a multi-award winning artist. In 2016 she received ‘The Best current UK Soul Artist’ award for the second time from The Soul Survivors Magazine readers vote. She has also been included in several renowned DJ’s ‘top tens’ around the world. 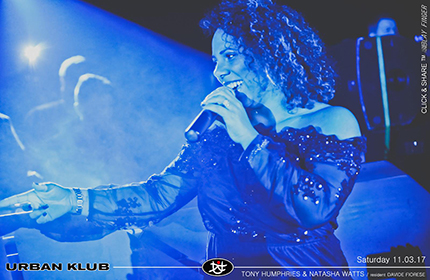 2018 has seen Natasha land a weekly radio show with BBC Berkshire where she DJs live on-air every Thursday evening. She thoroughly enjoys her time on-air, sharing music, talking about life, and having a good laugh. Alongside her radio show she wrote and released her much anticipated this album ‘My Next Chapter’ – which flew up a host of UK charts, hailing it the best-received album Natasha has ever written. She received support from Tony Black Burn, Jazz FM, and Magic FM to name a few.

Career highlights so far for Natasha have been opening up for The O’Jays at the Theatre Royal London, supporting Shalamar at the world-famous London Palladium to a sold-out crowd.

Natasha performed in Osaka, Japan with ‘A Hundred Birds Orchestra’ and has been a dream come true for Natasha. She comments “myself with over 35 musicians is the stuff of dreams, traveling out there now 3 times to perform has really opened my eyes to a different way of performing. Everybody working in sync together to create magic is the best feeling in the world.”

Natasha organised a virtual evening performance during the 2020 lockdown in aid of a local charity. She chose St Michael’s Hospice (North Hampshire) Ark Centre as it is a very personal charity to her. The virtual performance was hosted on Facebook Live and Instagram Live – hundreds of viewers and supporters visited her Just Giving page and over 1200 individuals donated. By the end of the performance, Natasha had reached 187% of her donations target goal and made well over £1800. She was incredibly humbled by the number of donations and comments that were posted during her performance and was so pleased she was able to give back to a charity so close to home.

During the 2020 Covid-19 pandemic, Natasha used her time in lockdown to let her creativity flow naturally and took advantage of the extra time she had on her hands. Her creativity flourished and Natasha was able to develop and work on some new future projects. For the first time in years, she was able to focus on self-care and projects at a comfortable speed. Natasha felt it was an important time to stay productive, but let her mind relax and to chill as well. She was able to create future plans on how to move forward, especially through the pandemic and coming out of lockdown.

Currently, Natasha is writing a new album and has involved her band with the writing and recording process. This allows both her and her band to explore new avenues and share ideas with one another.

In addition to working on her new album, Natasha has been involved with several amazing collaborations, with more information to come and release dates of 2021. Natasha hopes that 2021 can bring new opportunities and be a bit less rubbish than 2020!

Natasha hopes that she can get back to touring again in the near future, she is also very excited to release and share her new music with the world.

Sorry, no posts matched your criteria